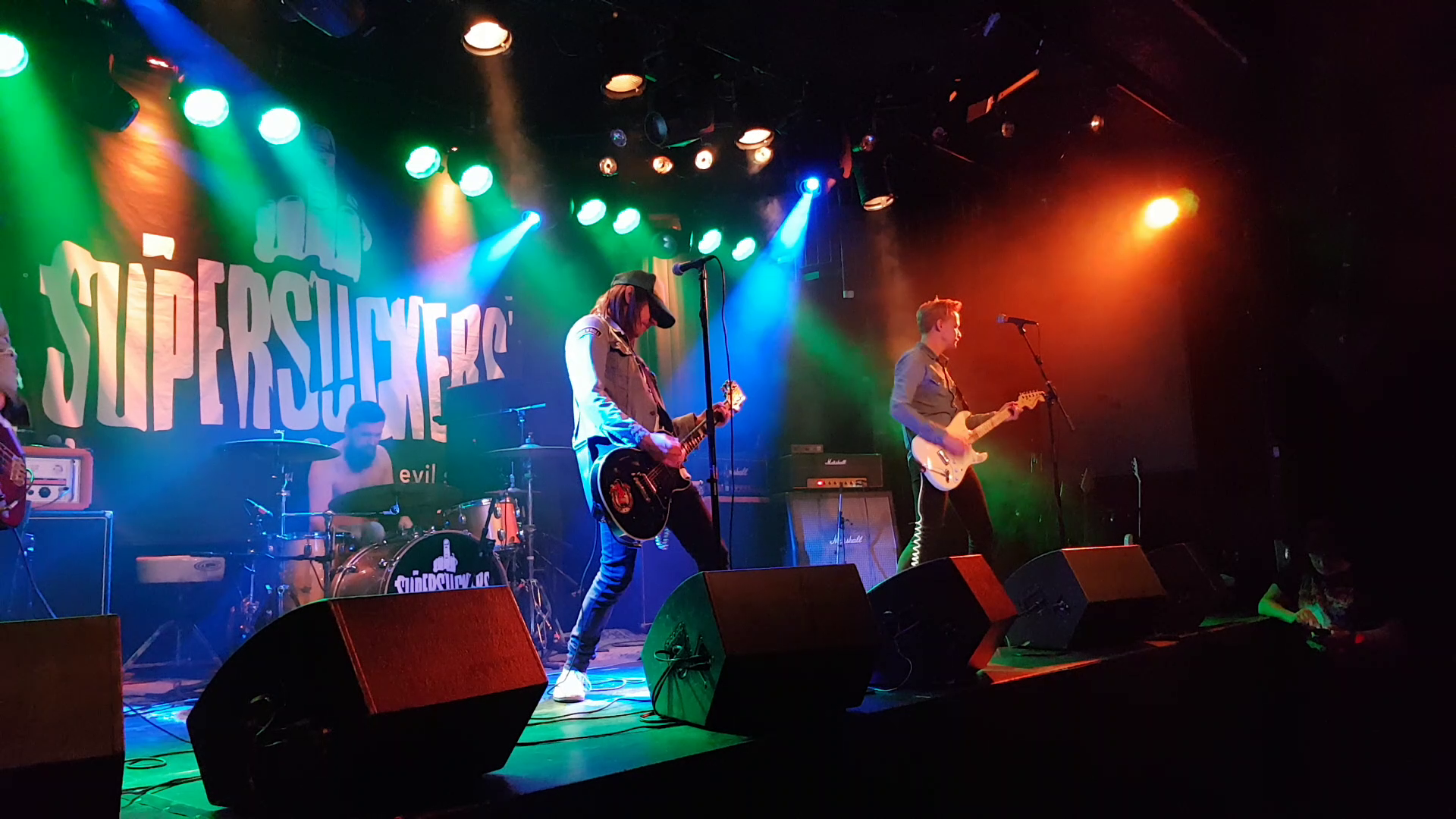 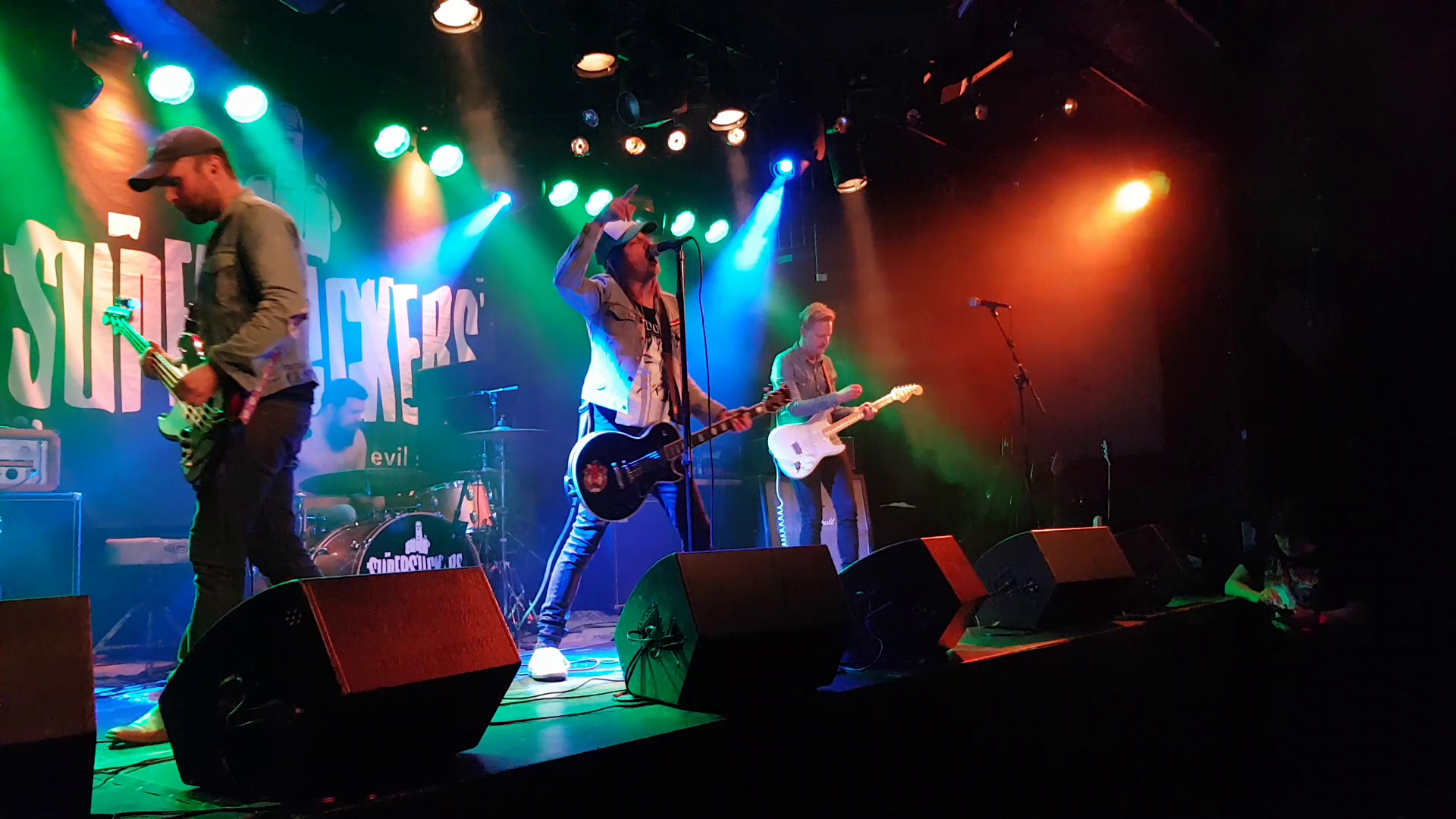 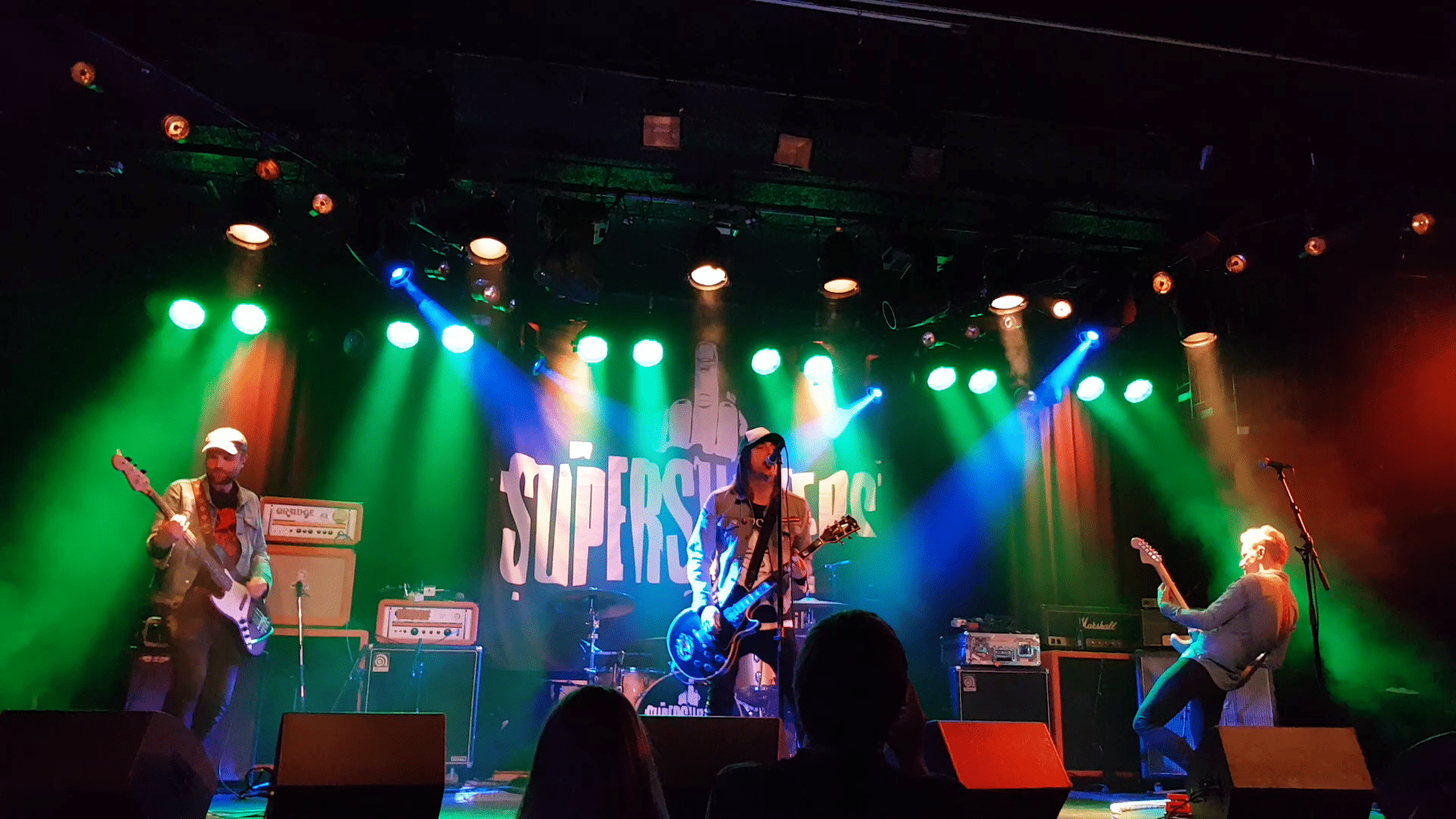 POSSIBLY THE GREATEST BAND TO BLAST THEIR WAY OUT OF GOTHENBURG SWEDEN.

Way back at the end of ‘96 these three wayward teenage miscreants inspired by their collection of Motorhead, Ramones, Kiss, Iggy and The Stooges and Dead Boys records picked up their guitars. 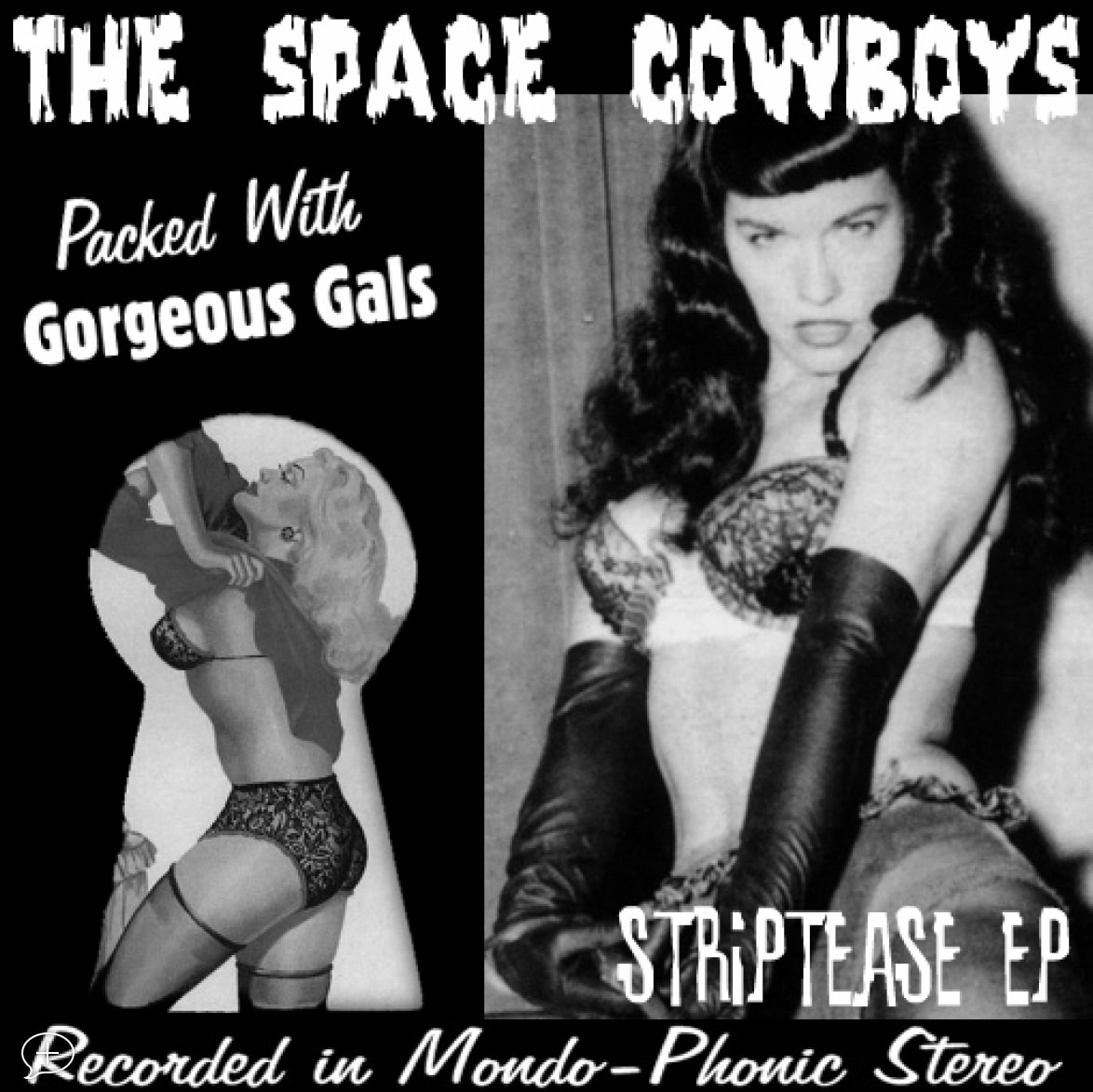 Three years later claims seemed less outrageous when they released their first E.P. “Striptease” – four slabs of high octane teenage energy and aggression – these boys meant business. The international circuit of punk rock’n’roll labels and ‘zines was soon buzzing about THE SPACE COWBOYS as labels in the U.S.A., Australia, Spain, France and Austria all dived in and made releases by the band – all of which sold out or went to re-pressings very quickly.

Labels were well aware of what the band was up to and a plan was hatched to offer the band the chance to release their debut full length album – the deal was quickly done and meanwhile the band continued to build its worldwide fanbase that saw last years singles “Straight To Hell” (Pitshark Records / France) and “Alright Now, Get Ready” (Glazed Records / U.S.A.) both get 4K reviews from Kerrang and the latter also found its way onto John Peels radio show.

Their “Rollin’ Sixes” mini-album (Safety Pin Records / Spain) also received great reviews from Kerrang, Metal Hammer and Rocksound in the U.K. “HIGH ENERGY RACE” is an album so hot it will blister paint – its fast, raw and almost untamed primordial rock’n’roll with a nod in the direction of Detroit mixed with that plundering Viking edge they share with so many of their countrymen. Their youth brings a new edge to “the old dog” people said could not learn any new tricks – rock’n’roll has discovered a whole new set of thrills, energy and passion and THE SPACE COWBOYS have them all. 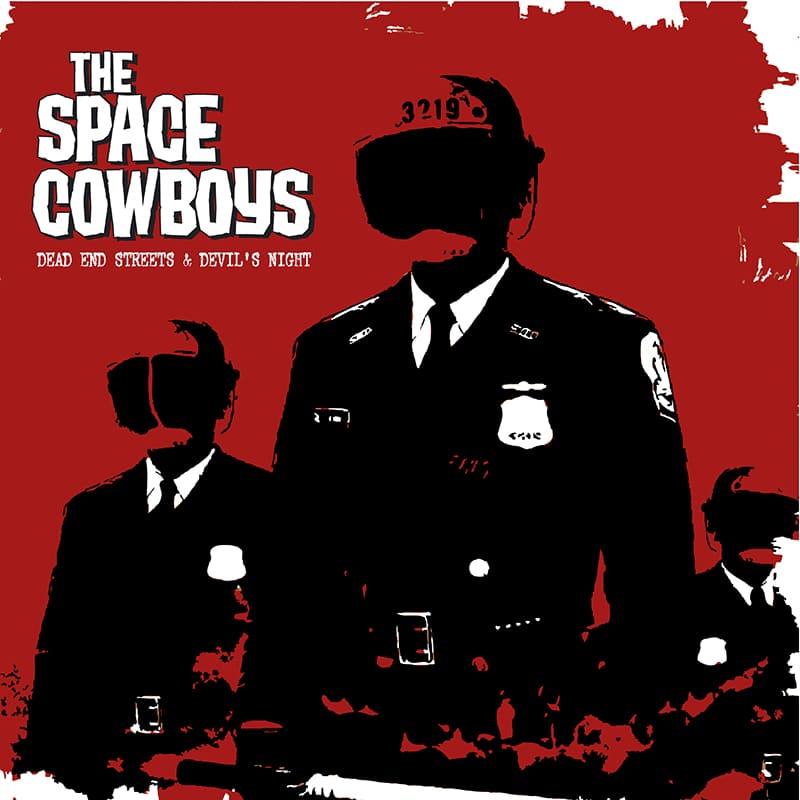 After two years the band land a record deal in America. Sonic Swirl Records signed them in a heart beat. The band spent most of 2005 writing & recording their new album. They came up with a monster of an album titled “Dead End Streets & Devil’s Night”. Thirteen tracks of raw, fuel-injected, high-energy punk rock n’ roll. All killer and no filler! “Dead End Streets & Devil’s Night” is filled with 70’s style guitar leads & solos added with an in your face punk rock attitude. Rocks as hard as the first couple of Hellacopters releases, raw & tough like old school New Bomb Turks and the energy & volume of Iggy Pop & The Stooges. “Dead End Street & Devil’s Night” will leave wanting more! And now the album will be released in Europe thru Bad Reputation Records

New Tune out for you digital hero. #thespacecowboy

The Space Cowboys & The Alpha Pilots live in Stock

Are you ready for some action rock!!! 20 minutes t

Yes a new release!!! This time on the amazing labe

These guys are from Sweden, and they sound like a cross...

between early Hellacopters and The Supersuckers at their most rockin’.  And the songwriting is just as good.  In other words, this should be pure sonic bliss for a certain segment of rock fans.  This is an all too rare case of a band who, sure they’re doing something that’s been done a million times before, but they do it well enough that I’m not the least bit bothered by that.  I love killer guitar riffs, blistering leads, and catchy vocal hooks.  This sucker has all three in spades.  Good enough for me.  Yeah, it gets a bit repetitious by the end, but by the time you start to think “that’s enough” it’s over.
(Bob Ignizio) Utter Trash

For all the rock revival that?s...

happened over the last five years or so, there?s still one key rock ?n? roll element that?s been ignored by its revivalists: the genre?s obsessive emphasis on balls-out energy.

We once looked to the usual suspects to provide us with pure rock fury, but most of those guys have either watered down their sound or gotten out of the game altogether. What?s a rock fan to do? Well, for starters, check out The Space Cowboys? Dead End Streets & Devil?s Night as soon as possible. Embodying the riff-first philosophy and stop-on-a-dime soloing that made those old Hellacopters album so amazing, Gothenburg?s The Space Cowboys do nothing but rock and rock hard. There?s no pussyfooting around on Dead End Streets & Devil?s Night – it?s all about being ultra-loud, fast and raw, with linear, blinders-on devotion to rocking as ferociously as damn possible. This is awesome.
Rating: 9 out of 10
Review from: Brave Words & Bloody Knuckles magazine (aka BW&BK)

The Space Cowboys are another kick ass rock n roll band from Sweden (where else)...

these four teenage tear-aways delivery it hard and fast.  Their no-nonsense glam punk rock is very much in the vain of the likes of Backyard Babies and Buckcherry.
It may not be a new sound, but it’s still a classic sound that has lasted the test of time and still has its fans out there (me for one).
The bands latest release ‘Dead End Streets & Devils Night’ is fast paced rock with the bands influences such as The Ramones and The Stooges in full show.
The album opens up at break neck speed with ‘Sleeping Enemy’ and the pace continues throughout the album with tracks like ‘Beat Me’, ‘Automatic Love’ and ‘Damnation High’ setting the standards.
There is no time to catch your breath with each track rampaging through your speakers and the tuned out guitar leaving its scars on your psyche.
If your into the likes of Backyard Babies, Buckcherry, The Helicopters, The Ramones, then your gonna love this album, as it has all those bands smuggled in there somewhere.
(Fairmallzinee)

Dunno what it is about Nordic bands...

that make them so proficient at quality Punk Rock ‘n’ Roll, but this 4-piece outta Sweden have just  upped the stakes. These 13 tracks hurtle along with a total disregard for whatever head the songs may smash in to. Think early NEW BOMB TURKS played with the attitude of ‘Stink’-era  REPLACEMENTS and the intoxicated charm of HANOI ROCKS and you’re close. Add on the dirtiest and most pulsating bass sound heard in years and you’re closer still. The energy of the songs is unreal – the opening 4-track salvo in particular leave  the listener hung, drawn and sonically quartered. Awesome a political Punk Rock ‘n’ Roll played with a conviction that 99% of bands in this genre can but dream of.
(Scanner Zine)

started 10 years ago with punk/hard rock’n’roll influences such as MOTORHEAD or the STOOGES. Now here they are with this new album out on the French label Bad Reputation. Don’t expect anything original on here but this is well done and the guitar solos remind me of the ones on the early HELLACOPTERS records, which is a good point. Nevertheless, like most bands in that style, there’s no real stand-out song, this is all played with energy and everything but once the last notes stop to play, you can’t remember any chorus or song, this is always the same punk rock tempo and vocal lines but well, this something quite common in the hard punk rock’n’roll world. Ok, if I had to choose then I’d suggest to listen to “Automatic Head” if you want the best from these Swedish COWBOYS. On the other hand, I’m sure that the band must be more than enjoyable live, they sound like they’ll be the happiest guys in the world if you get a few beers, put your MOTORHEAD shirt on and go headbanging in front of the stage during their show. Get this album if you like bands like SUPERSUCKERS./laurent
(Veglam WebZine)S

There's a noise going on in Sweden that's finally making it's way to the States..

This sound is filthy, loud, fast, obnoxious Rock And Roll that is more American than American RnR has ever been! The Hives, The Bones, Backyard Babies, The Peepshows, and Puffball are just a few of the bands recently breaking ear drums on American soil. The latest offering just may be the loudest, fastest, most rude and obnoxious yet!

The Space Cowboys is the name and blowing out speakers MUST be their game. In 1996, the band formed to create this completely new spin on Rock And Roll in the name of influences such as Motorhead, Kiss, The Ramones, Iggy And The Stooges, and The Dead Boys. They spent from 1999 until now releasing EPs and mini-albums on various labels in U.S.A., France, Spain, and Austria, until landing a deal with Sonic Swirl Records out of Cleveland, Ohio. The band took most of 2005 to write and record the monstrous album titled Dead End Streets & Devil’s Night.

This album is so loud! When I put it in my player, I had the volume set at my normal level and it about blew me off the couch. I also noticed that all of parametric LED displays on my equalizer were PEGGED and did not budge for the entire album! That’s what I’m talking about. Aside from hearing a little bit of their mentioned influences in the music I also picked out some Social Distortion, New York Dolls, and a bit of The Sex Pistols. The production is heavy on mid range and not over-blown like most of today’s recordings, which leads me to believe that it was not a lack of money but allegiance to their brand of Rock that resulted in this. Fans of Rock And Roll will appreciate this fact.

The album bursts in with “Sleeping Enemy” and never lets up! There are no 45 second intros, no break-downs, and no slow songs. By the time you get mid-way through to “Gotta Go” you’ll be hooked. The songs are very catchy, anathematic, huge, well written and one hell of a ride! There is also just enough of that amateur “thing” to let you know that they’re not interested in being anything else but exactly what they are……good, tight, loud, guitar screeching Rock And Roll. Vocalist Daniel Angelin has a rather normal voice that complements the music perfectly. His approach is that of a live performance as you can find spots of voice cracking and general rawness made acceptable by the likes of Lemmy, Iggy, and Johnny Rotten.

This album is so true and honest to itself AND the listener that you have no choice but to love it. There are no tricks and no fast moves. It’s all laid out in front of you from the first song all the way to the last. And, as a fan of Rock myself, I say to The Space Cowboys……”Thank you!” 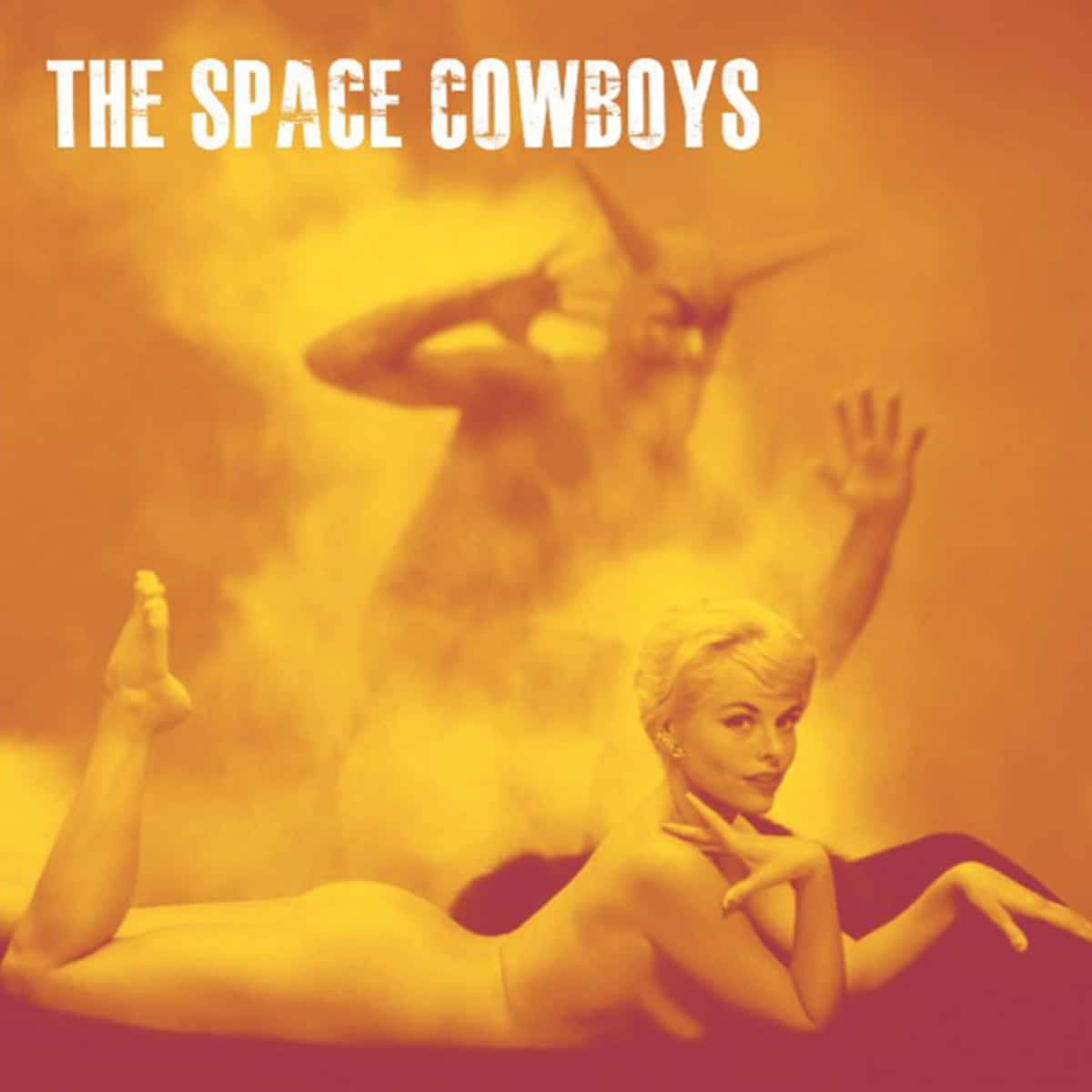 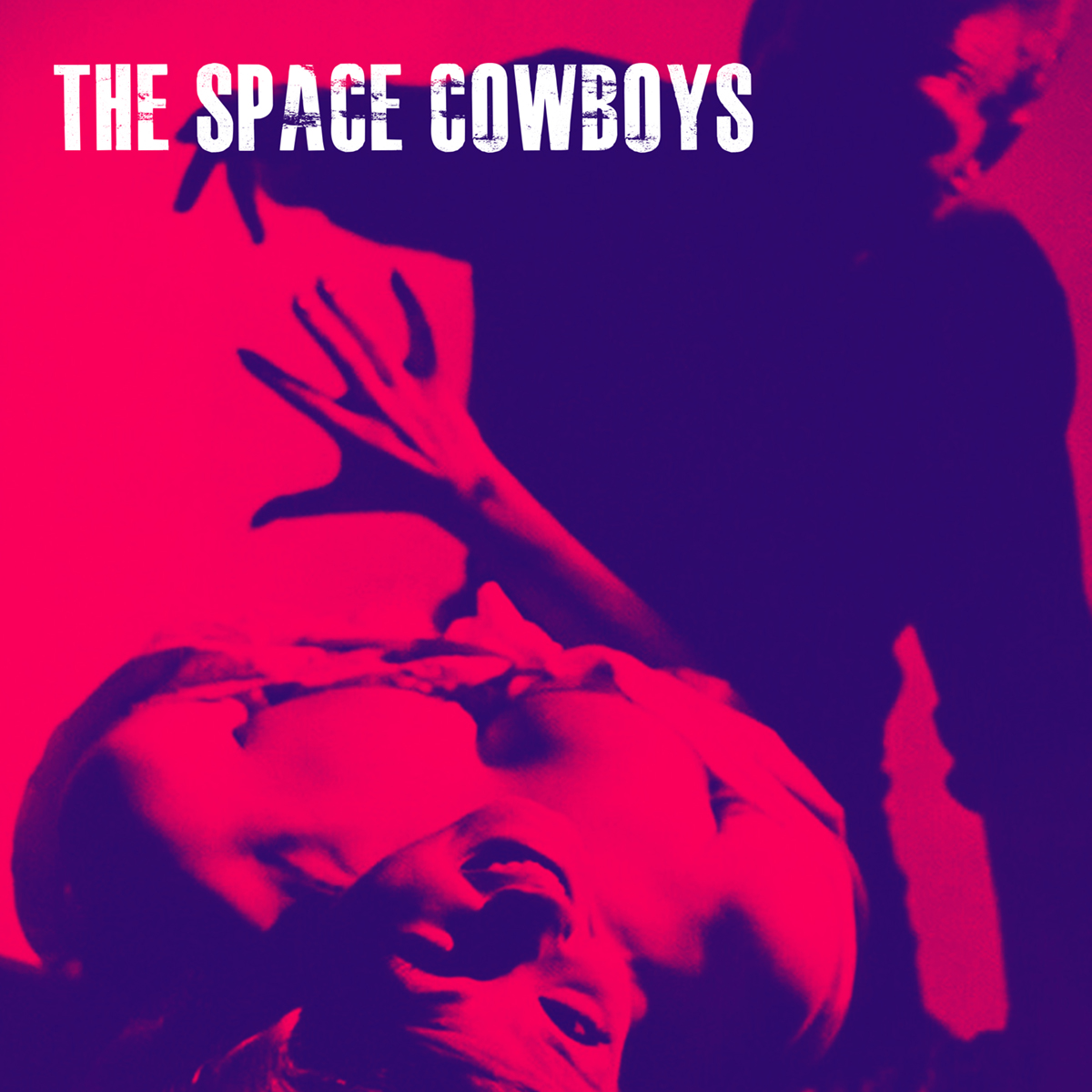 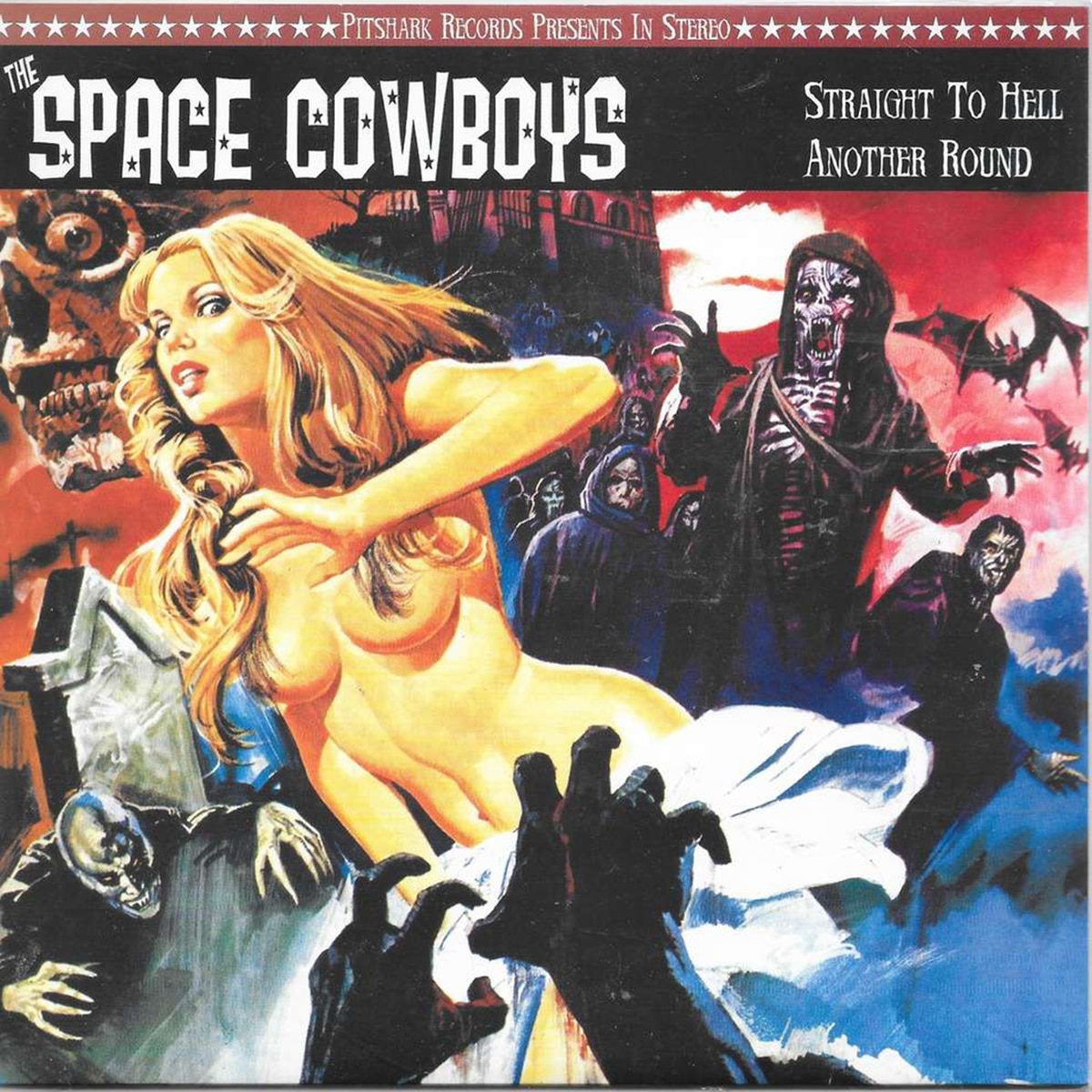 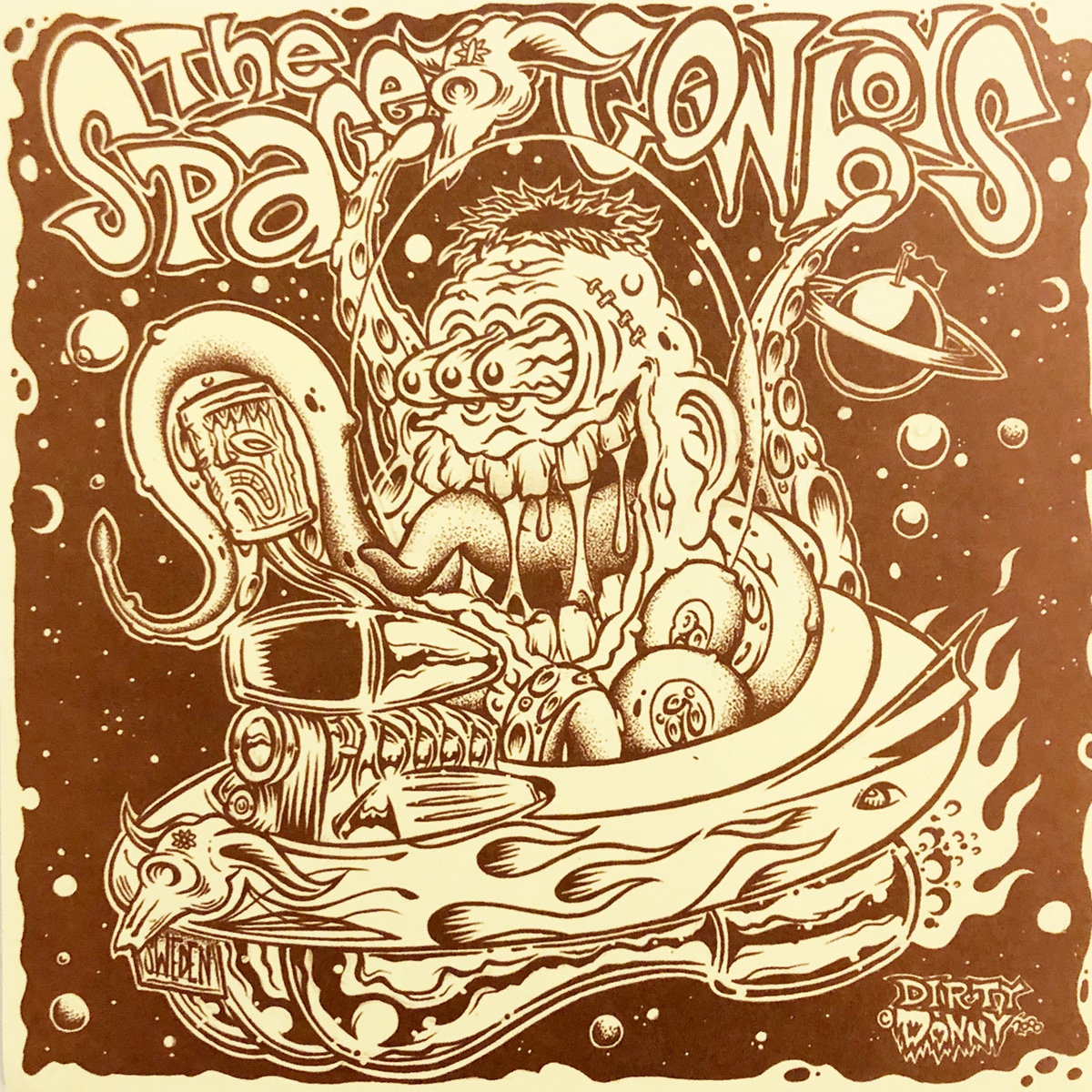 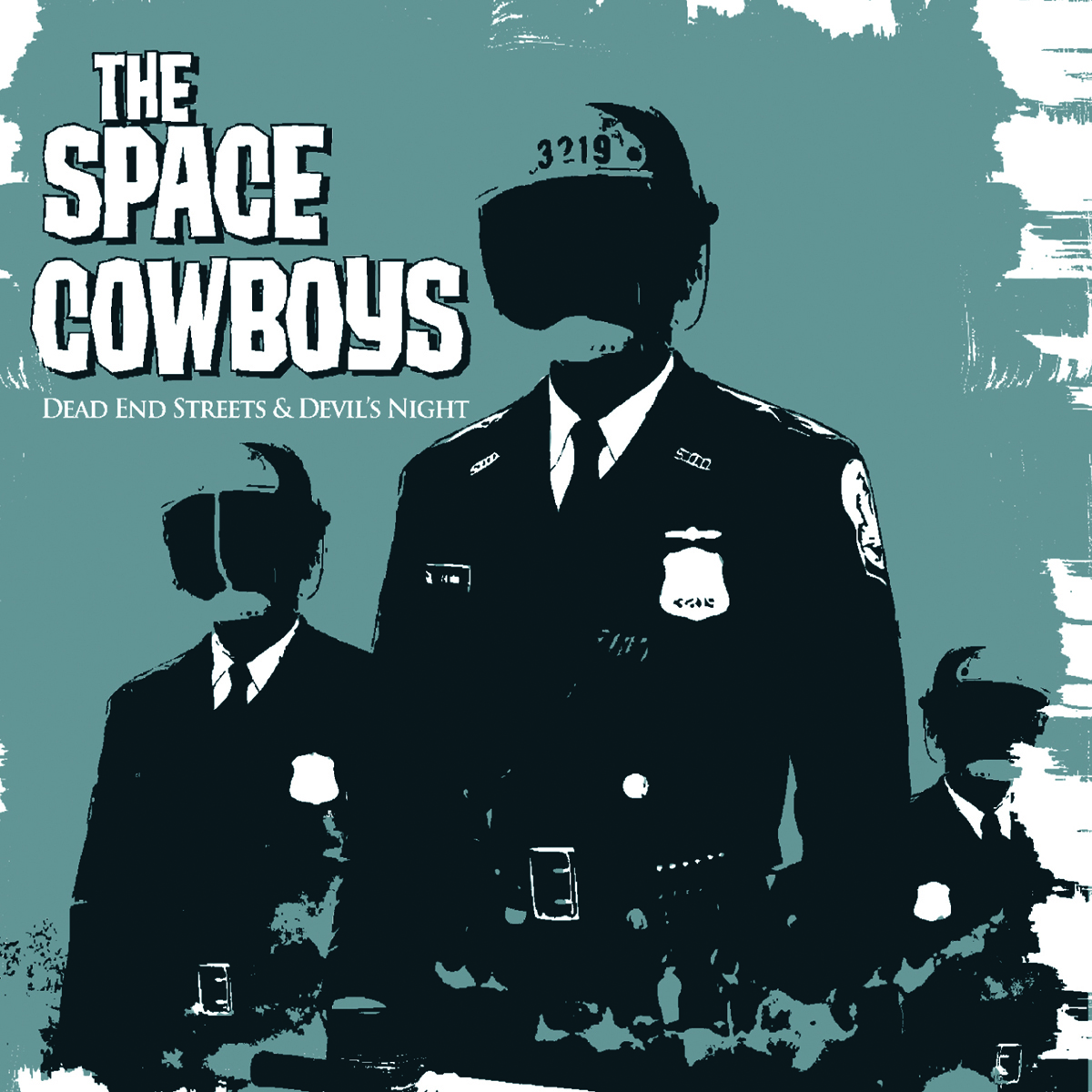 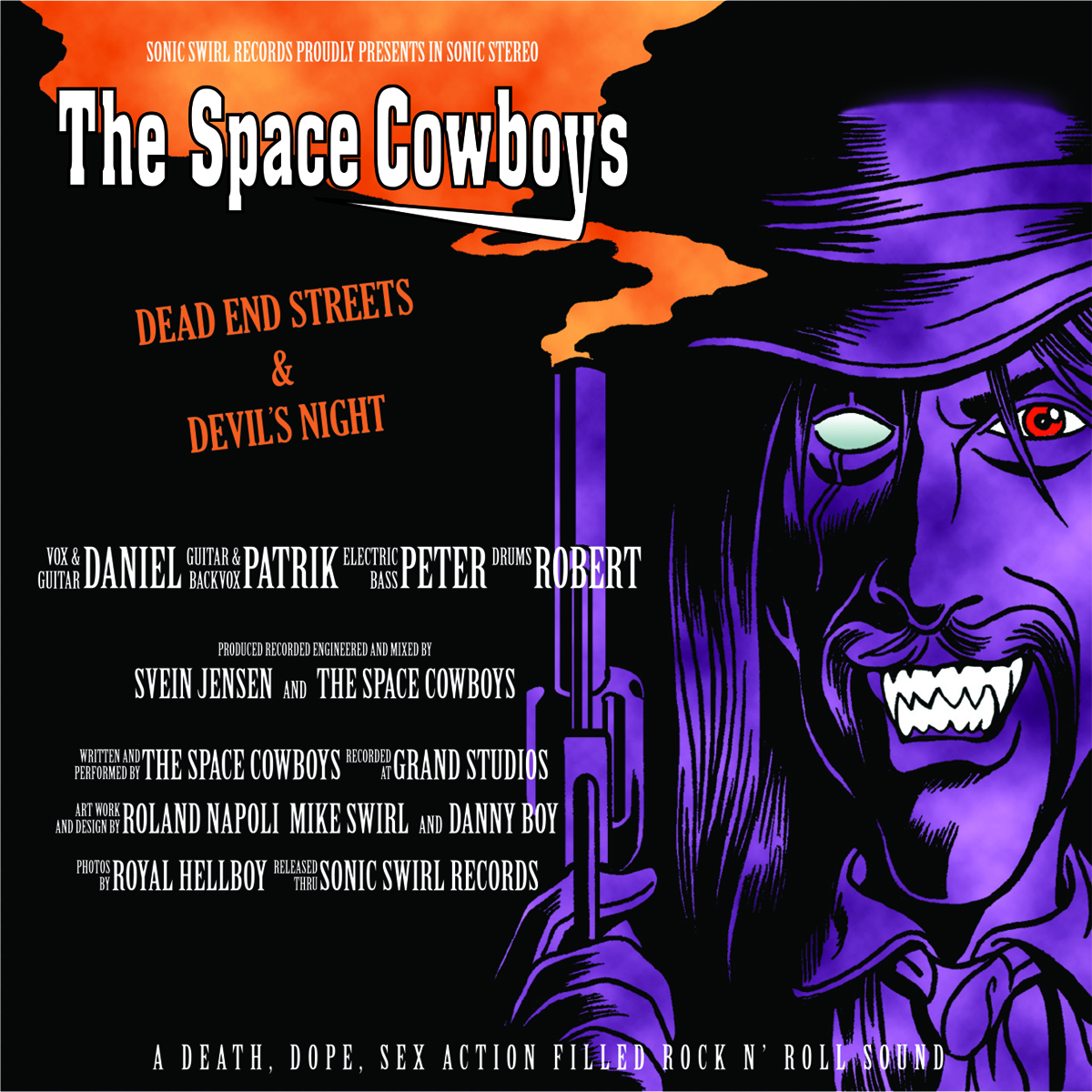 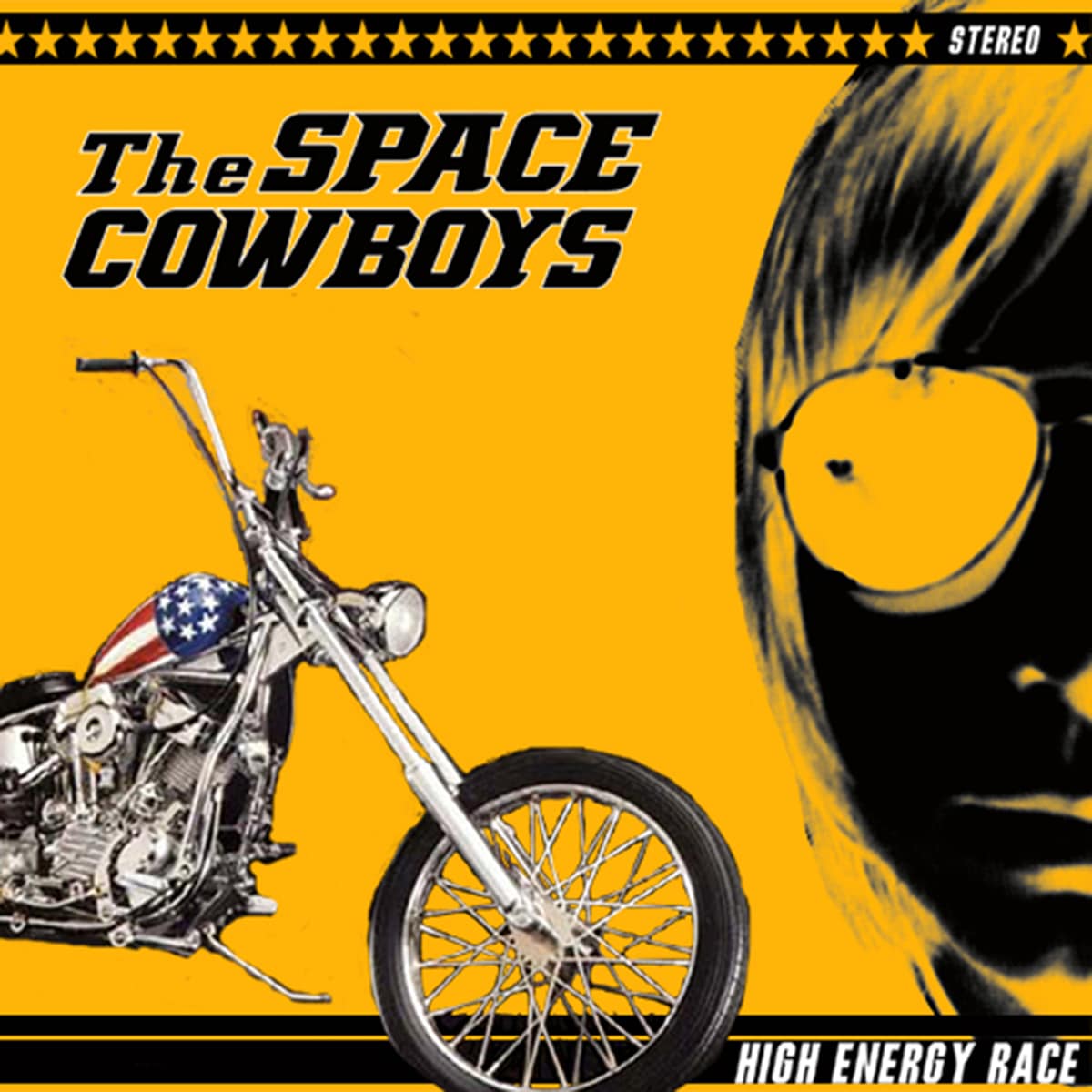 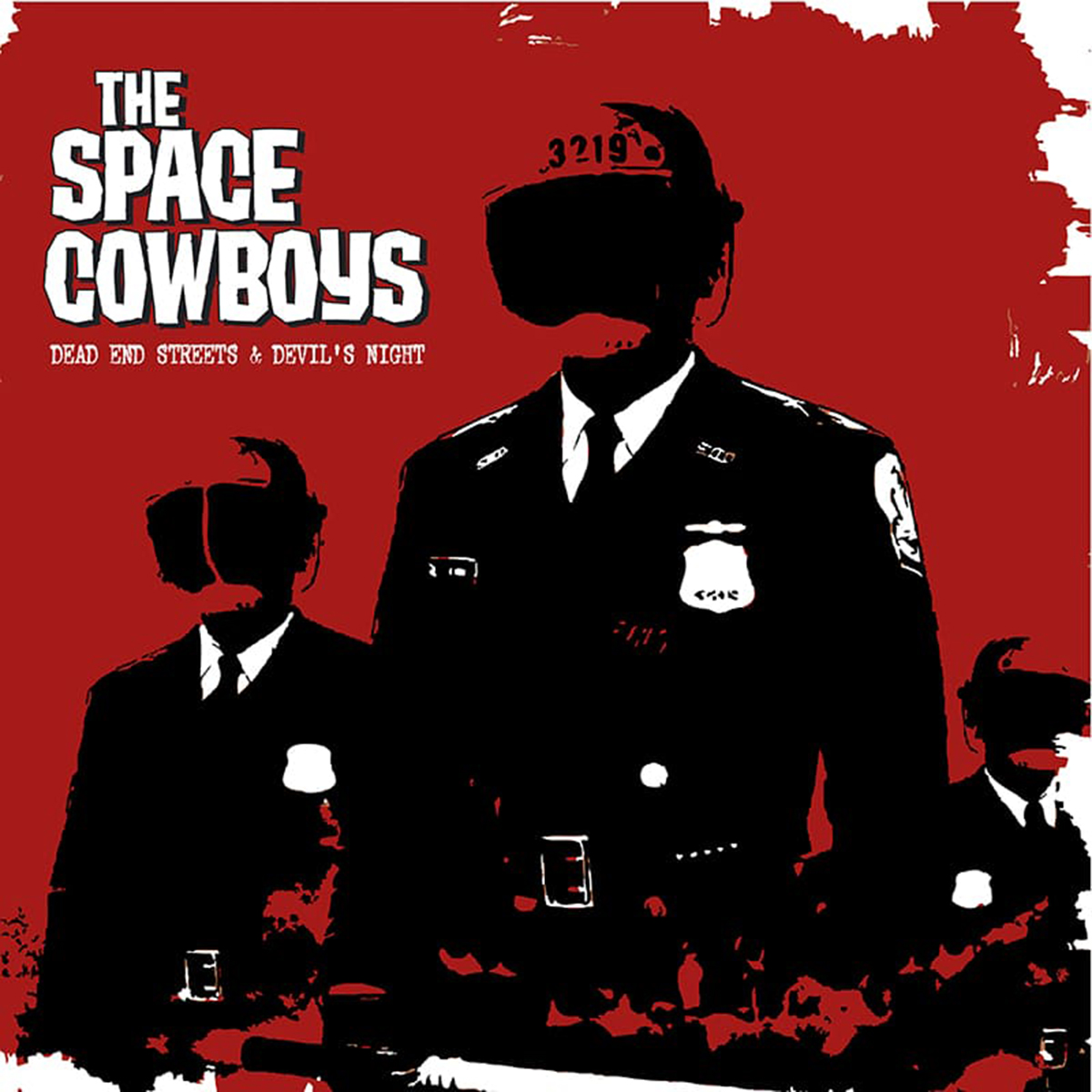 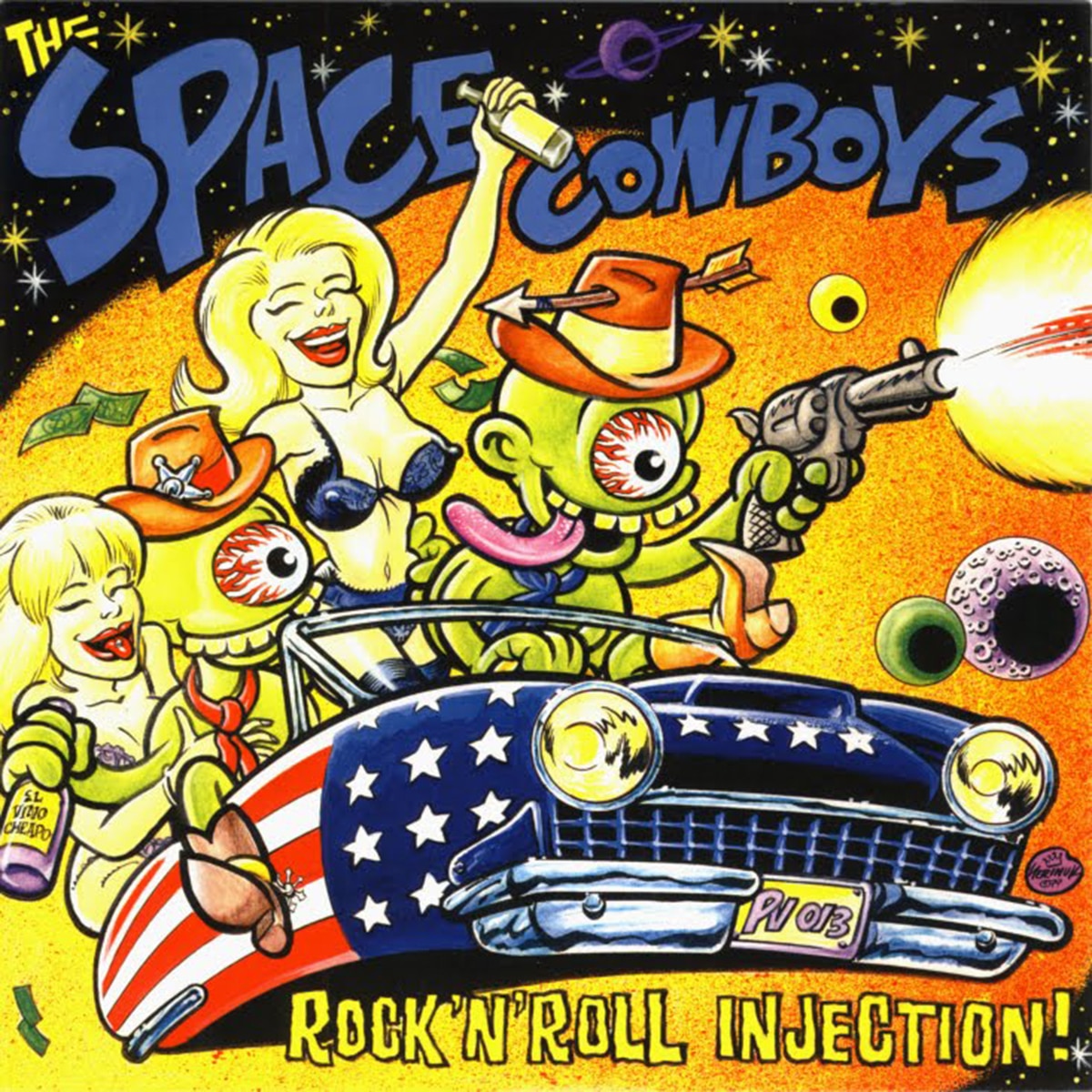 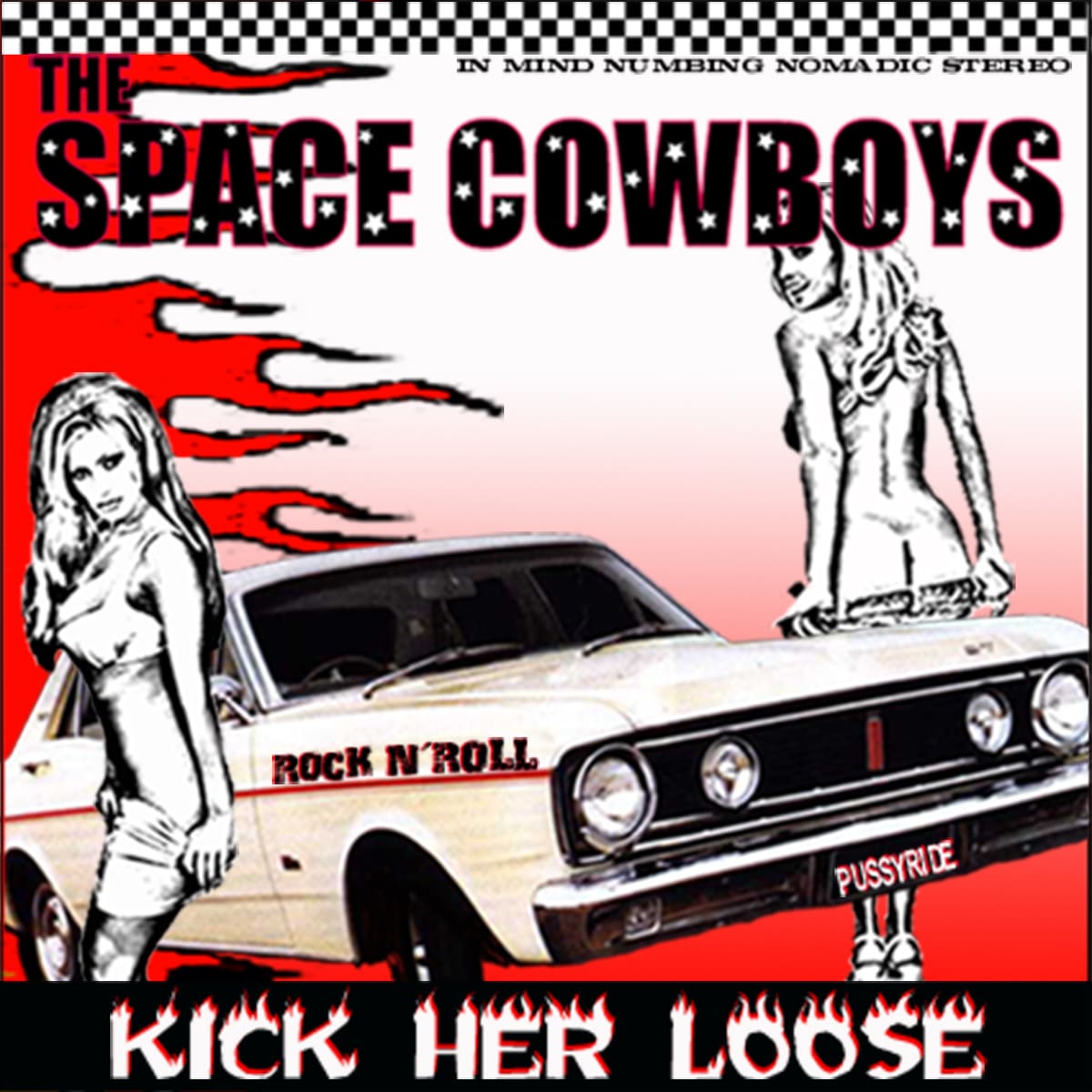 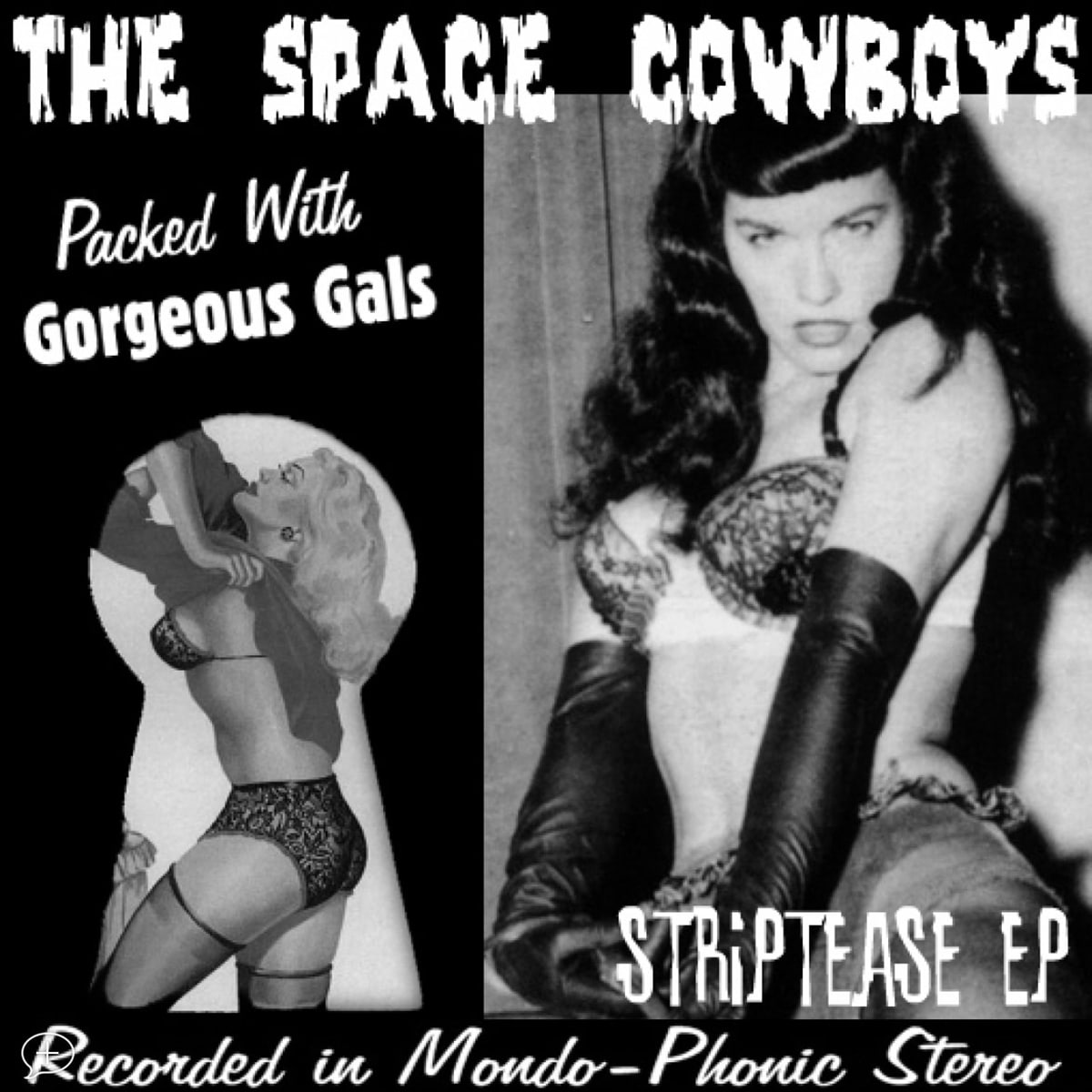 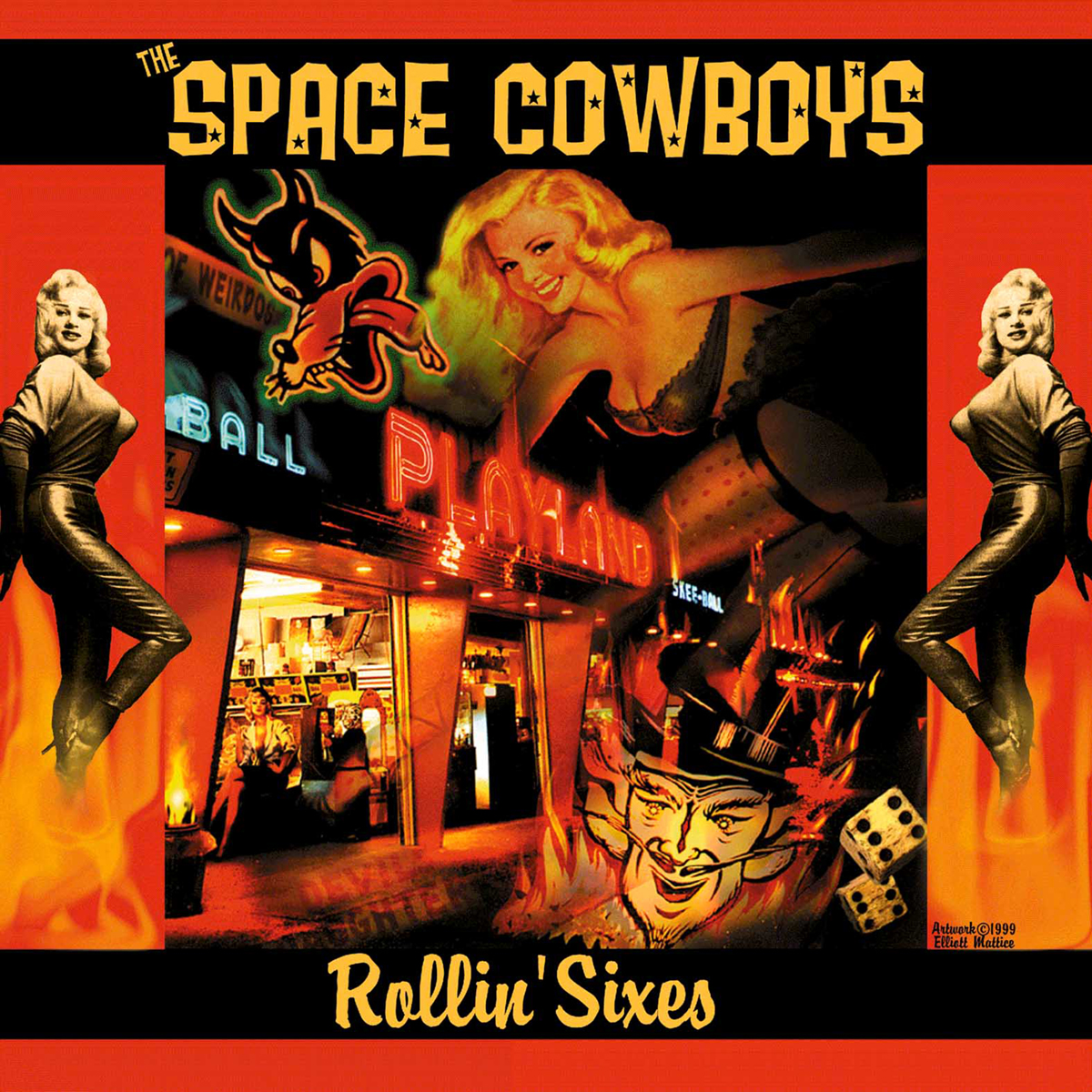 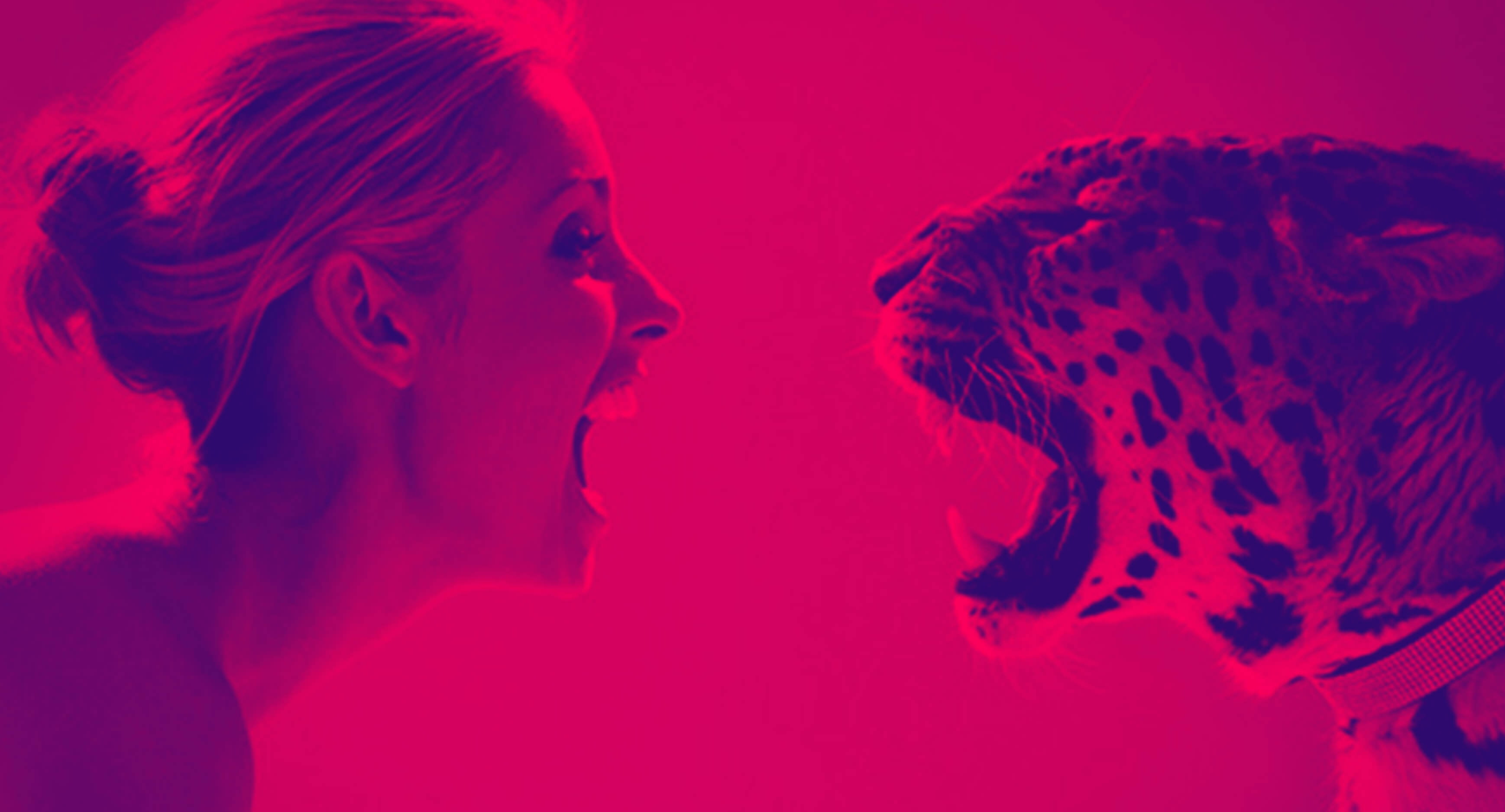